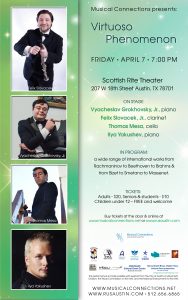 Tickets (at the door):

Vyacheslav Grokhovsky, Jr., piano and Felix Slováček, Jr., clarinet will present popular classical music by P.I. Tchaikovsky, I. Stravinskiy, F. Schubert, F. Liszt, C. Debussy, J. Massenet, G. Bizet. Vyacheslav performs extensively as a soloist and chamber musician and is a member of the E. Napravnik Piano Trio and chief director of the International Eduard Napravnik Music Festival in the Czech Republic.  Clarinetist Felix Slováček, Jr. is heralded by the Prague Post as “The virtuoso phenomenon and the future of Czech entertainment.”

Thomas Mesa, cello and Ilia Yakushev, piano will play together traditional classical music in 2d part of concert. Thomas Mesa is a soloist, chamber musician, teacher, and doctoral candidate at the Manhattan School of Music in New York City. He has performed either in ensemble or as soloist in venues such as Carnegie Hall, Alice Tully Hall, and WMP Music Hall in New York; and other concert halls in major cities.

Highlights of Yakushev`s 2015-16 season a return appearance with the St. Petersburg Philharmonic, as well as performances with the Reading Symphony and Fairfield County Symphony. He also played recitals in Connecticut, Florida, New Jersey and New York.

The City of Austin’s Cultural Arts Division, a grant from the Texas Commission on the Arts, an award from the National Endowment for the Arts, and Great Promise for American Indians have all helped make this event possible. Please join us!

To learn about upcoming shows or to obtain interviews or reviews, please contact Sergey Vashchenko at balalaika@sbcglobal.netor at (512) 656-6865.