Nina McIntire, originally trained as a concert violinist at the Moscow Tchaikovsky Conservatory, is also a modern concert pianist. In her new multimedia show, “Ivory Fantasy”, McIntire integrates many musical genres, including classical, jazz, rock, and pop, to create a revolutionary contemporary style. She accompanies her piano performance on-stage with vivid and colorful visuals. The videos, created by Nina, are inspired by her composition and meant to intensify and expand the musical emotion.

McIntire has always emphasized the importance of reaching a wide audience. Her innovative compositions and her joy in creating and performing them will speak to young and old alike, removing the divide between classical and contemporary popular music. Known as the Ivory Enchantress, McIntire has successfully performed for diverse audiences in Finland, Russia, Germany, and the United States.

Aileen Adler has been playing and performing the Theremin, the world’s first electronic instrument, for over 20 years. Invented in 1920 by Russian physicist Lev Sergeyevich Termen (or Leon Theremin), the Theremin produces many tones and dynamics, from the vocal effects of a singer to the sounds of a violin. Because the Theremin performer manipulates electromagnetic fields to create sound, never touching the instrument, performance is as fascinating for live audiences to watch as to hear.

Trained as a violinist and as a vocalist, Adler strives to present the Theremin as a diverse and viable musical instrument, adapting its “other world” sound to many styles, from the classical tradition to jazz. “Theremin for the Masses” is her self-produced 13 song compilation. 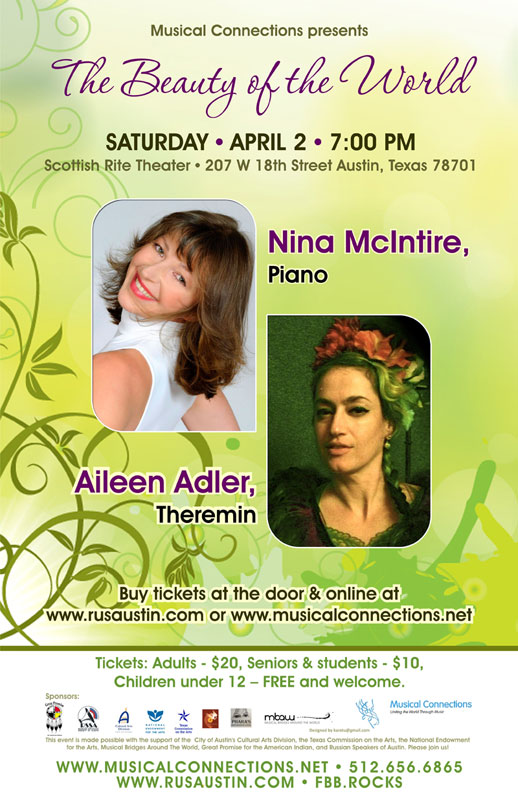