The second concert “Russian Spring Fest” is presented by Russian Speakers Society will be held on the next day, May 14, at the First Unitarian Universalist Church, 4700 Grover Ave., 7:00 PM, and will continue to take you on a romantic journey through music. This concert will be in a more private atmosphere where public will have an exclusive opportunity to interview the artists and enjoy a reception in Russian style, catered by Sasha’s Russian Market. Admission for this concert/reception is $20. Ticket information: 512-459-1449

All of these performances have a wide appeal to music lovers from all walks of life and interests. The artists are the best interpreters of that kind of music.

The program of the second concert supported with funding from the Cultural Contracts Division of the City of Austin, Texas Commission on the Art and The Non Profit Center.

Nikita Storojev, Russian-born opera bass, graduated from the Tchaikovsky Conservatory of Moscow. Upon winning the prestigious Tchaikovsky Competition, he became principal soloist for 5 years in the Bolshoi Theater and the Moscow Philharmonic Society. He is now a French and Mexican citizen and lives in Paris and Austin, Texas. Nikita Storojev has performed in the world’s major opera houses, concert halls and international festivals in Vienna, Paris, London, Milan, New York, San Francisco, Florence, Munich, Tokyo and Berlin. His vast repertoire consists of over 50 operatic roles and more than 300 classical songs. He has performed and recorded under the direction of conductors such as Mstislav Rostropovitch, Vladimir Ashkenazy, Sir John Pritchard, Claudio Abbado, Neeme Jarvi, John Nelson and Gennady Rozhdestvenski and with singers such as Placido Domingo, Luciano Pavarotti, Katia Ricciarelli, Ruggiero Raimondi and Nikolai Ghiaurov. He is accompanied on piano by Tatiana Storojev-Stepanova, Moussorgsky Competition Laureate, a World prominent voice coach and pianist.

The European award-winning and 2004 Grammy Award Contender virtuoso Russian duo arrived in Texas in 1995 as part of a Sister City cultural exchange program. Known for its community educational projects, it consists of Ukrainian-born balalaika player Sergey Vashchenko and Vladimir Kaliazine, Russian bayan (accordion) player. Among other awards, Mr. Vashchenko won first place in the 1980 Ukrainian Russian Folk Instrumental Competition, and Mr. Kaliazine was concertmaster for the Folk Dance Ensemble of Siberia. Before moving to the Texas, duo was awarded numerous prizes in Germany, France, and Spain.

For more information, please contact Mr. Vashchenko at 512-420-0574 or Balalaika@sbcglobal.net 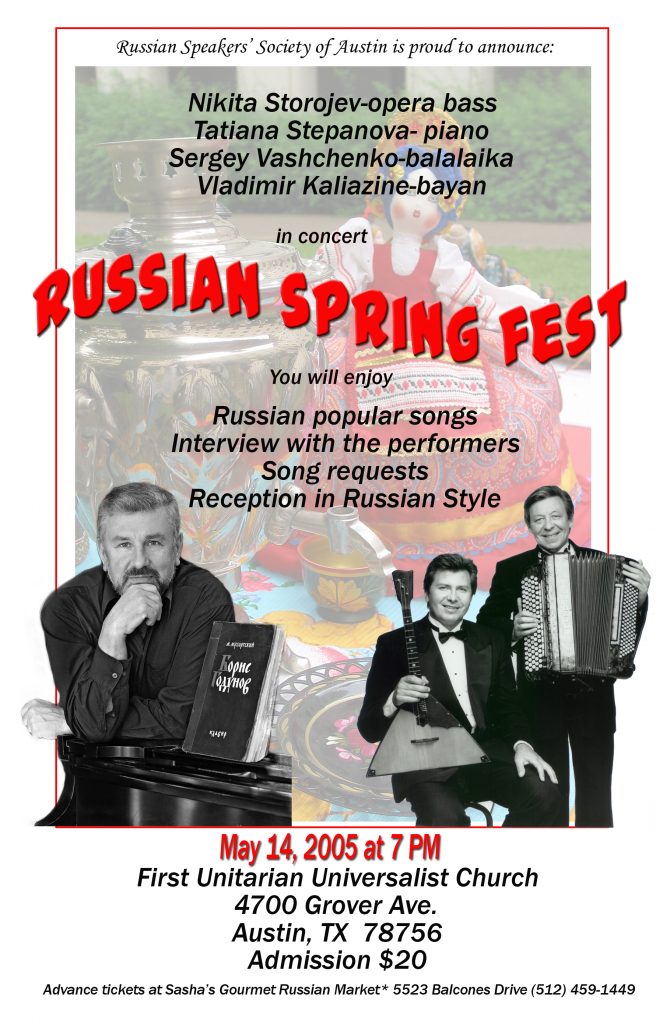