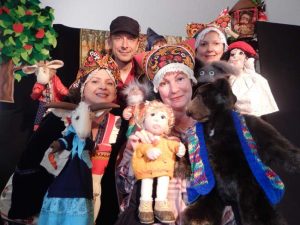 Performance will be on Russian.

The City of Austin’s Cultural Arts Division, a grant from the Texas Commission on the Arts, an award from the National Endowment for the Arts, Russian Speakers Society, Hohloma Puppet Theater of Houston, all have helped make this event possible. Please join us!

The main character is the small and kind gnome Vasya, he is following the advice of his family of gnomes and dwarfs, saving various fairytale heroes and  becomes noticeable to those around him.

Enchanted Strings
Saturday, December 12, 2020
at your home
Join us for the exciting “Enchanted Strings” classical music performance night. We are eager to celebrate with you Beethoven’s 250th birthday! International and Austin based virtuoso musicians came together to bring the best musical selections to your home.