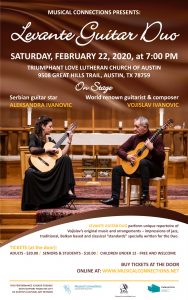 Of the Duo’s performance Scott Collins from “Guitar Muse” wrote: “…With performances that are poised, lyrical and flawless in execution, the interplay between the two seems almost telepathic.”
Music of Vojislav Ivanovic, performed by some of the leading guitarists and orchestras of today, has gained international reputation in the world of classical guitar and beyond. His works are among the most frequently performed music for the instrument worldwide and have scored raving critics and acceptance by the audience. Compositions such as Cafè Pieces, Sonata, Balkan Express and English Concerto have achieved status of repertoire pieces.